Fairy tale of wine industry has a happy ending

The Search is on for the 2010 Champion Young Wines

Fairy tale of wine industry has a happy ending 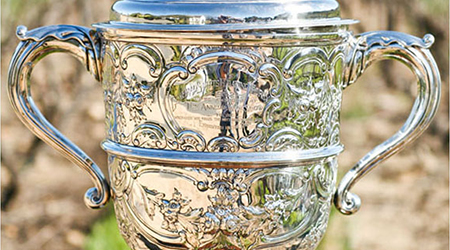 Surely no reader of WineLand could fathom that this Cinderella was in fact the South African wine industry of the 1930’s. KWV chairman Dr CWH Kohler voiced these words at the opening of the 1930 wine show and added that the general public and Parliament had little sympathy for this growing industry. Fortunately for all fervent supporters of this industry which promotes enjoyment of life, Cinderella has turned into the storybook princess.

But the fairy tale started way before the 1930’s. As early as 1833 the WP Agricultural Association (now known as Agri-Expo who still supports this initiative) initiated a wine show as part of the agricultural show calendar. In 1912 Cinderella had her first glimpse of palace life when the unanimous feeling that the wine industry deserved a separate show due to the growing attention it now received, brought about just that – a separate showcase for South African wines. The year 1958 was another milestone when the new Goodwood show grounds became the home of the agricultural show and the wine show previously held in Rosebank also moved there. During the same time South Africans were introduced to the new kid on the block with the soft flowing name, Pinotage.

Compared to the 2 036 young wines entered by 179 participating cellars during this year’s Young Wine Show, 300 wines were entered in 1962 and Paul Sauer, then minister of agriculture and owner of Kanonkop (who says politics and pleasure shouldn’t mix), pleaded for an enjoyable, honest and affordable wine for the man on the street. In 1974 the show spread its wings and regional young wine shows were held in Breeriver Valley, Boberg and Stellenbosch and through growing interest of the KWV the first SA Champion Wine Show was held in 1977 with the KWV, Agri-Expo and regional show associations as equal partners. To eliminate the weeks spent on the road to visit and judge at all the regional shows the judging process was once again centralised in 1987.

At the beginning of a brand new century Agri-Expo for the first time presented the SA Young Wine Show Awards ceremony at Nederburg in 2000 and since then the show rotates to a different wine region every second year. The show is presented annually by the South African National Wine Show Association (SANW) with the aim of giving winemakers the opportunity to showcase the best their current vintage has to offer. The 2008 Show was the 175th event in the colourful history of wine shows and is still under the custodianship and co-sponsorship of Agri-Expo. Today wines are entered from the eight participating wine regions, namely Robertson, Worcester, Stellenbosch, Paarl, Oranje-Vaal, Olifants River, Swartland and Klein Karoo.

Unlike other wine competitions and shows, the Young Wine Show compares the quality of wines that are still at the beginning of the vinification process – en route to being blended and bottled, and of course enjoyed.  Apart from champion trophies for the winners of the 17 different categories, participants especially covet two trophies (respectively for the overall champion young wine and the highest score for five best entries) named after giants in South Africa’s history – General Jan Smuts, who piloted the creation of the KWV through Parliament during his reign as Prime Minister, and Pietman Hugo, former chairman of KWV.

Although it seemed that earliest judging relied solely on the chemical analysis of the wines, Dr Charlie Niehaus of the KWV stated back in 1943 that a well developed knowledge and experience of every cultivar is vital for true judging. “And then of course one needs a fine organoleptic memory to be able to compare the wines,” he wrote in Wine and Spirit. However, the judging systems in place today have been finely honed to highly sophisticated adjudication machines with the full backing of the industry and passionate interest of lovers of the fortified sap of the vine.

As to the aim of a show such as the Young Wine Show, wine writers of old wrote in the Wine and Spirit magazine of November 1933 that the highest aspiration of the wine show has to be educational. Duimpie Bayly, current chairperson of the SANW, fully agrees. “The show enhances the relationship between producers,” he says, “and in the process of rubbing shoulders and voicing opinions the knowledge base is expanded and the overall wine culture of South Africa is stimulated once more. The current judging system incorporates an 8th judge on the panel whose vote does not count and who is there essentially for training purposes.  It is in essence an opportunity for comparison, sharing and learning, which inevitably influences the next round of wine making, and consequent enjoyment of the end product.”

Representatives of the industry agree that the intrinsic value of this wine show that has stood the test of time lies in the exchange of knowledge between apparently rival wine producers. “Of special importance are the interaction and exchange of important information between producers and the special working groups within the industry who focus their energy on the promotion of the different cultivars,” says SANW vice chairman, Bennie Howard. According to Agri-Expo chairman Johan Ehlers knowledge regarding cultivars derived from these working groups are absorbed and results of the application of the knowledge can be seen and tasted at every next show. For this reason Agri-Expo financially supports these working groups for the good of the industry as a whole.

The wine show has become an inseparable part of the South African wine front and time has shown that despite economic pressures or political upheavals producers will continue to strut their stuff at these shows, while at the same time gaining insight from the successes of failures of their competitors, and the public will continue to closely watch progress made in the perfection of this much loved beverage.

Cinderella has indeed become the darling of not only most South Africans, but of wine lovers throughout the world. And the wine show has no doubt served as the glamorous ball at which she met her handsome prince.