Should SA reposition itself as ‘the vineyard of Africa’ rather than a supplier of cheap & cheerful wine to the Northern Hemisphere? written by Catea Sinclair 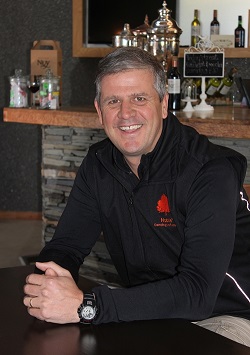 The Board of the SA National Wine Show Association (SANWSA) elected a new Chairman at its AGM and Board meeting that were held in Paarl.

Christo Pienaar, Cellar master and manager at Nuy Winery in Worcester takes over the helm from Charles Hopkins, Cellar master at De Grendel, who has retired after a stint of five years as the chairman.

Christo has been actively involved at SANWSA for more than 10 years and has been the chairman of the Technical Committee that is responsible for the judging processes at both the SA Young Wine Show and Veritas awards.

He started his career in wine in 1996 after completing his B Agric Degree in Vini – and Viticulture and Agricultural Economics at the University of Stellenbosch. He also worked overseas spending two vintages in Victoria, Australia and Washington State in the USA respectively before joining Rooiberg winery in Robertson. After four years at Slanghoek Winery he was appointed Cellar master at Nuy Winery in 2002. He also spent more time overseas in the regions of Florensac, France and the Mosel, Germany.

He is a board member of Agri-Expo, and serves on the Technical Committee of BBK in Worcester and the Tasting Panel of the Worcester/Breedekloof region. He is married to Adri, a teacher, and they have two children.

Christo says  “ I believe that the two wine shows that the SANWSA presents on behalf the Wine Industry plays a vital role in promoting quality wine to the consumers in South Africa and that the heritage of these shows will encourage wine makers and viticulturists to make the best wine that we can produce in the Cape Wine lands.”

The SA Young Wine Show is open for entries and details are available on the website. Entries close on 27 June 2017 at the regions and 6 July at the SANWSA offices. More than 2000 entries are expected to compete for the 17 trophies and the coveted Genl Smuts trophy for the best wine of 2017 and the Pietman Hugo Trophy for the cellar with the five best entries.

TIME TO ENTER THE YOUNG STARS IN OLDEST WINE SHOW

The precious heritage of the SA Young Wine Show